HOWARD CAYGILL is a philosopher and cultural historian who was educated at Bristol, Sussex and Oxford Universities in the UK. Most recently serving on the faculties of Goldsmiths, Kingston and Paris VIII, Howard Caygill is the author of several acclaimed books including A Kant Dictionary, Walter Benjamin: The Colour of Experience, On Resistance: A Philosophy of Defiance and most recently Kafka: In Light of the Accident. He is currently working on the philosophy and aesthetics of the anthropocene and the role of philosophy in curating and interpreting the art produced by inmates of mental hospitals during the first half of the Twentieth Century. He lives between Athens and Barton-on-Sea on the coast of England.

Kafka: In Light of the Accident, Bloomsbury Press, London, 2017

On Resistance: A Philosophy of Defiance, Bloomsbury Press, London, 2015

Levinas and the Political, Routledge, London, 2003 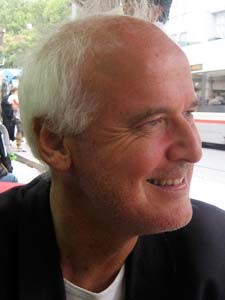