Myron Beasley, Ph.D. is Associate Professor in the areas of American Studies and Gender and Sexuality Studies at Bates College, USA His ethnographic research includes exploring the intersection of cultural politics and art and social change, as he believes in the power of artists and recognizes them as cultural workers; He has conducted fieldwork in Morocco, Brazil, the US and currently in Haiti. The Andy Warhol Foundation, the Whiting Foundation, National Endowment for the Humanities, and most recently the Reed Foundation (The Ruth Landes Award), have awarded him fellowships and grants, for his ethnographic writing about art and cultural engagement. He has also been recognized for his teaching (awarded teaching awards) and works in the area of pedagogy from the International Communication Association, Ohio University, and Brown University. His writing has appeared in many academic journals including The Journal of Poverty (which he served as guest editor for a special issue on the topic of Art and Social Policy), Text and Performance Quarterly, Museum & Social Issues, The Journal of Curatorial Studies, Gastronomica, ELSE and Performance Research. He is also an international curator. 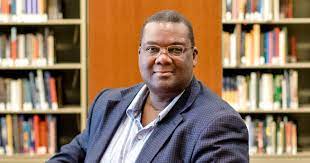